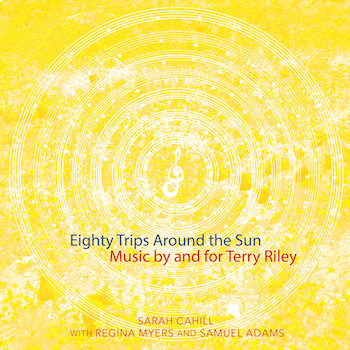 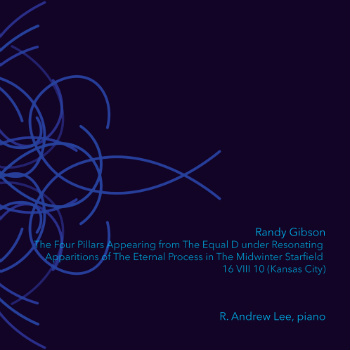 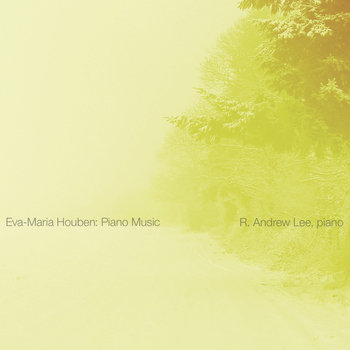 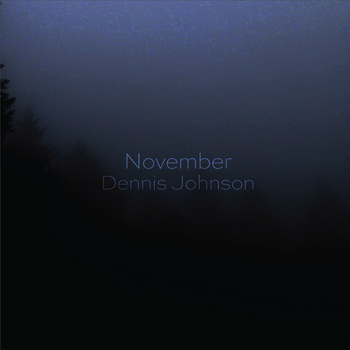 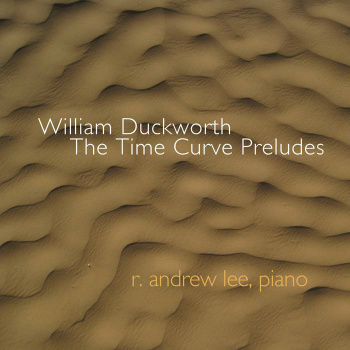 The Absolute Sound by Derk Richardson "a deep dive into that more-than-minimalist aesthetic, a boundless source of fascination and delight."

Pop Matters by Andy Jurik "Cahill astounds throughout the entire four-disc collection. Her virtuosity is unquestionable, brilliant with technique and touch yet while still deeply evocative and musical."

Stereophile by Jason Victor Serinus "Cahill's remarkable survey, which spans 50 years of Riley's output for solo and two pianos, showcases both the breadth of Riley's musical imagination and her own sensibility. Few who listen closely will fail to sense the probing mind, open-eyed wonder, and sensitivity of a keyboard artist intent on deepening her relationship with a kindred spirit."

All Music by James Manheim "serves equally well as a survey of his music and influence… A thoroughly satisfying release that will be listened to well into the future."

Press for Inner Monologues (Venn Diagram of Six Pitches)
Christian Carrey "Lee is a dedicated advocate and compelling performer, cannily exploiting the resonance of the instrument, never pushing the proceedings but instead trusting the piano’s decay to be a guidepost."

Best of Bandcamp by Peter Gargask "The piece is exquisitely quiet, spare, and slow, opening with a single heavy chord that hangs in the air, loaded with portent. It takes almost a minute before we hear it again, but then it is appended with a couple of tentatively-voiced single notes, as if the piece is summoning up its courage to progress."

Touching Extremes by Massimo Ricci "[Lee’s] interpretation of the small variations, reiterative fragments, sudden ruptures and profound clusters conceived by Knight is impeccable; we can literally visualize the connection between hands gifted with the certitude of foreknowledge and a mind that, gradually soothed by the frequencies, little by little becomes one with the sonic tide."

The Box is Empty Review by Jeremiah Cawley “Lee’s playing takes on a sheen that was surely always present but disguised in Epstein’s counterpoint. Poignancy of tone, revelatory articulation, and textures now snarled, now transparent, are the sublime outcomes of Lee’s renderings of Epstein’s musical strictures.”

Press for Jay Batzner: as if to each other...
Pitchfork Review by Seth Colter Walls “Lee has rocketed to prominence in the world of modern and contemporary classical music, thanks to his sterling technique as well as his curator's attention to pieces in need of greater hearing.”

Press for Jürg Frey: Pianist, Alone
Detroit Metro Times by Mike McGonigal “No matter how much work by slow-burners like Morton Feldman, Giacinto Scelsi or LaMonte Young you've listened to, you will have to retrain yourself for years, and while performing this music to enter some kind of fugue state. Performers like R. Andrew Lee are like competitive long distance runners in this respect.”

The Arts Desk Review by Graham Rickson “Lee's concentration is contagious. If you were hearing this music live, you wouldn't dare leave the hall, such is the potent spell it casts.... This is music that needs to be heard, not heard of.”

Other Music Review by Michael Klausman “This is music that is so attentively focused and nearly Zen like in its perfection that you get the sense that Frey, via Lee, has reached some heretofore unattainable endpoint of music.... The rare music that renders everything else you hear around it totally superfluous.”

Just Outside Review by Brian Olewnick “How difficult to separate the physical actions of the keys from the automatic connotations the notes evoke.... A marvelous recording and a great addition to the canons of both Frey and Lee.”

Press for Dave Seidel: ~60Hz
Sequenza21 Review by Paul Muller “a fine example of the artistry that can be inspired by the palette of the humble sine wave.”

Press for Eva-Maria Houben: Piano Music
Selected as one Top 10 Classical Recordings by Alex Ross for The New Yorker

Dusted Magazine Review by Marc Medwin “With releases like this, Kansas City’s Irritable Hedgehog is fast becoming a reference label for contemporary piano music and Lee as one of its staunchest proponents..”

Just Outside Review by Brian Olewnick “R. Andrew Lee... performs these works with great sensitivity and depth... after six or seven listens, I'm still enjoying tackling it anew each time.”

Sequenza21 Review by Jay Batzner “Lee’s touch and timing are sensitive and nuanced. I can easily hear the care and concentration that goes into these performances and I have no trouble picturing a stoic and deliberate performance on stage.”

Press for Landscape of Descent
Just Outside Review by Brian Olewnick “It draws you in much more, hints at layers unheard… a large, finely layered mass that very, very slowly fades away, or descends into the nether world.”

Press for Dennis Johnson: November
Selected as the Best Classical Recording of 2013 by Time Out New York

Time Out NY Review by Steve Smith “Enter pianist R. Andrew Lee, whose impressive string of albums... has included major pieces by outliers like Tom Johnson, Ann Southam and William Duckworth. Lee’s new recording of November, a five-hour span of superhuman patience and stamina, rescues Johnson from oblivion, and offers a sea of tranquility far removed from the everyday grind.”

New Music Box Review by Isaac Shankler “There are many ways this kind of improvisation could go astray, but Lee’s sense of pacing is impeccable. He might spend several minutes lingering on an idea, exploring its many permutations, or he might breeze through a passage in a fleeting and ephemeral way, but the way Lee manages to keep a sense of direction going throughout this material is truly impressive. The overall effect on the listener is something like exploring pools of liquid connected by tiny canals.”

The Wire Review by Dan Warburton “It’s a joy from start to finish, and Lee’s playing reveals as much genuine affection for the piece as it does scholarly attention to detail.”

Sequenza21 Review by Jay Batzner “November comes alive under the fingers and musical abilities of R. Andrew Lee... Given such few musical materials and so much time, there are rather few pianists who I think could pull this off. Some could work with these materials for 30 minutes, maybe an hour, but the ability to bring forth five hours of music in such a compelling-yet-accessible way is nothing short of a miracle.”

Gramophone Magazine Review by Pwyll ap Siôn “[Kyle] Gann has claimed that Johnson’s composition ‘rewrites the early history of minimalism.’ Equally important is that November offers a rewarding listening experience on its own terms.”

The National (UAE) Review by Andy Battaglia “As played by the pianist R. Andrew Lee, November could not be more stark. A simple beginning of lone piano notes hangs in resonant space, with a suggestion of chords to come on a horizon that is hardly hearable... At stake are ages, epochs, aeons - intervals that rush forward and backward in a manner that makes the ever-patient present seem all the more active.”

Press for Jürg Frey: Piano Music
Surround Journal Review by Juko Zama “Lee sends his piano sounds into the air as if he was artistically placing stones in a Zen garden.... [His] performance seems to accentuate these characteristics in a natural organic flow, creating a surreal feel as if time and space were wavering or stretching.”

The Watchful Ear Review by Richard Pinnell “What Chopin said in streams of complexity, what Schubert told through richly patterned melody, so Frey retells with simple brushstrokes, which are reproduced here by Lee without fuss, but with immense skill. Stunning work then, and a new pianist to keep a close eye upon.”

The Wire Magazine Review by Philip Clark “Pianist R. Andrew Lee colours repetitions with an expert [variance] of touch and tone.”Best of 2012 by Christian Carey “Lee presents a committed performance in which Frey’s penchant for pianissimo passages, as well as his idiosyncratic use of repetitions and silences, are savored.”

Just Outside Review by Brian Olewnick “Lee, to his great credit in music like this, virtually disappears. There's certainly wonderful thought, consideration and decision making at play here, but the music seems to exist apart form a performer, a fine thing.”

Press for Queen of Heaven
Fame Review by Mark S. Tucker “This is a recording of a piece from a gentleman early in his career but also a proclamation that an interesting and provocative enfante terrible, if I may be allowed to gild the lily slightly, has arrived and may well become a determinant in where the course of the foundering Western Classical tradition will find itself.”

Press for The Time Curve Preludes
Gramophone Magazine Critic’s Choice for 2012 “Andrew Lee's recent recording is a fitting tribute to one of the unsung composer heroes of the 20th century.”

Clavier Companion Review by Sang Woo Kang “a captivating and thoughtful look at one of the more appealing examples of post-minimalism.”

American Record Guide Review by Ira Byelick “Lee is right at home performing this music, and he brings to it a clarity and space that suits it admirably.”

AllMusic Review by Stephen Eddins “R. Andrew Lee plays them with sensitivity and obvious affection... Highly recommended for any fans of new music for piano.”

Fame Review by Mark S. Tucker “the extremely capable hands of R. Andrew Lee, whose work, frankly, I find to be as interesting as David Tudor's coverage of John Cage”

Press for Soundings for a New Piano
File Under? Review by Christian Carey “Lee is a sensitive interpreter who recognizes the detailed and delicate character of Soundings.”

American Record Guide Review by Ira Byelick “Lee’s performance is engaged and exemplary. He caresses the music and communicates perfectly its quiet mystery.”

The WholeNote Review by Tamara Bernstein “Lee captures the spirit of curiosity that propels Soundings, and vividly conveys the distinctive, richly nuanced characters found in these 13 compact movements”

Sequenza21 Review by Jay Batzner “This EP release... is another excellent vehicle for R. Andrew Lee to showcase a subtle virtuosity and sensitive musical touch.”

Press for An Hour for Piano
Review in the Journal Notes “Lee’s version joins Rzewski’s recording as deserving to be preserved and made accessible to as many library patrons interested in hearing minimalism as possible.”

Fanfare Magazine Review by Robert Carl “R. Andrew Lee plays beautifully. Of course one needs control, elegance of touch, and enormous stamina to project the “infinite pacing” of the piece. But to these I’ll add his ability to clarify the various repeating layers of the different textures, not so different from delineating Bach’s counterpoint. Above all, I salute this uncovering and return to the repertoire of a gem of early American Minimalism.”

Sequeanza21 Review by David Toub “it’s in every way at least an equal of the Rzewski performance...And that’s meant as a compliment-both performers skillfully captured the beauty in Johnson’s piece, and I’m not sure either recording could be outdone.”

Just Outside Review by Brian Olewnick “This rendition by R. Andrew Lee...approaches the work a shade or two more gently than Rzewski (not surprising, given the latter's forged steel attack), allowing the notes a fraction of a second to suspend in space, which in turn may allow the listener an extra glimpse into the underlying mechanics.”